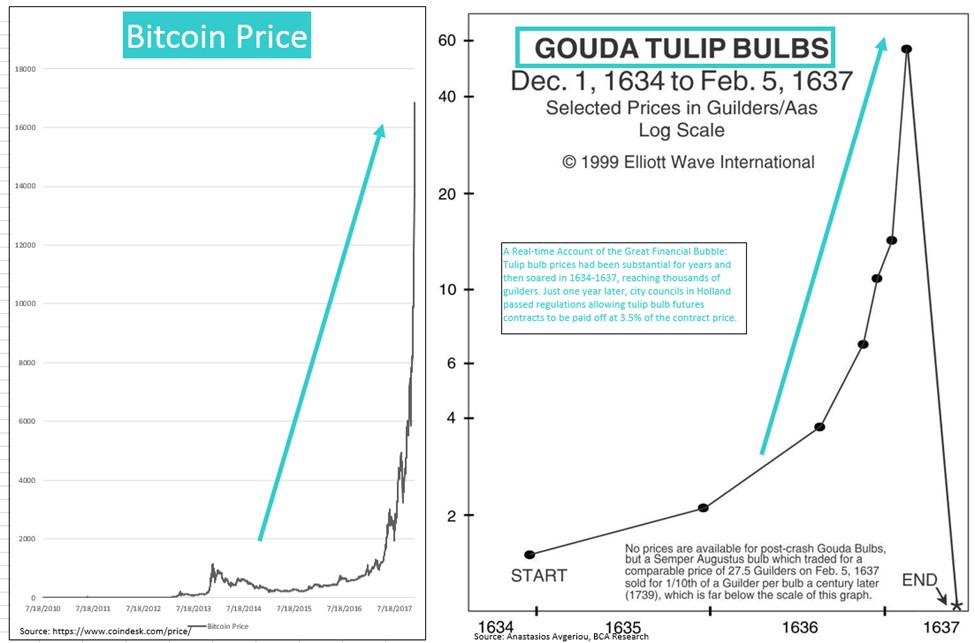 Last night, CBOE XBT Bitcoin Futures commenced trading on the CBOE Futures exchange. These futures allow market participants the ability to lock in a selling price for Bitcoin as of a future date. December 11, 2017, marks the first full day of trading for XBT.

Looking back in Bitcoin history, which was only 7 years ago, the value of a single bitcoin was worth a quarter-of-a-cent. Today, that single Bitcoin is worth upwards of $16,800! Over the course of seven years, its value has multiplied 1,000,000 times over since 2010.  Nothing attracts the attention of the public like the possibility of missing out on the latest craze. Regret aversion is a powerful emotion just as is following the crowd (Herding).

Many of you already know Bitcoin is a worldwide cryptocurrency and digital payment system called the first decentralized digital currency — as there is no central repository or single administrator. Spurred on by breathtaking price runups, some clients may even have asked you if they should invest in them, or if it’s safe to buy them and use them to make payments.

Most likely you dismissed the whole thing as some sort of a Tulip bubble, or a creature of illicit economies like the drug trade, money laundering, and cyberhacking. But it’s not as simple as that. Is this bubble the start of something big or is it truly a bubble as the chart above shows?

To start, let’s agree about the glorious benefits of blockchain technology (Bitcoin’s underlying technology) which undoubtedly is becoming a game changer in every aspect of our lives. However, that does not equate to Bitcoin’s future and its ability to become mainstream, for many reasons.

Is Bitcoin an Investment or a Speculation- is it ballooning up like the Tulip Bubble? I confess I am not an expert in Bitcoin. That said, I do have almost 2 decades of experience in the capital markets, having witnessed and studied many bubbles (Dotcom, Gold, Housing Crisis are few) over the years across various asset classes.

Here are 5 reasons in my personal view that Bitcoin is currently in a Speculative Bubble like the one we saw in the Tulip Bubble (See chart above):

Bitcoin’s current price appears to be in a speculative bubble due to the factors outlined above. True investors do not speculate with the lifelong earned dollars- they use goals, carefully picked investments, and a long-term investment horizon. Bitcoin optimists maybe driving the price on the shoulders of their over-enthusiasm- a true Bubble mania trait.

I do not know what the short term Bitcoin price return will be as short-term forecasting is unknowable. As an investor, while I recognize the diversifying aspect of Bitcoin, the speculative nature, the high price volatility, the security risk of being hacked, the concentrated owners and the lack of vendor usage today makes it appear more like a purchase of art or collectible. It does not appear to be a part of a long-term portfolio. This might change in the future.

Since, future is unknown, for now, I believe in focusing on what I know, understand, can explain and I encourage you to do the same!

The information provided herein is for general educational and entertainment purposes only, and should not be considered an individualized recommendation or personalized investment or financial advice; nor should the information provided herein be considered legal, tax, accounting, counseling or therapeutic advice of any kind. Any examples or characters mentioned herein are hypothetical in nature, purely fictitious, and do not reflect any actual persons living or dead. Practical Investment Consulting makes no representations, whether express or implied, as to any expected outcome based on any of the information presented herein. Users assume all responsibilities or the use of these materials, including the responsibility of protecting the privacy of their responses. Practical Investment Consulting does not accept any liability whatsoever for any direct, indirect or consequential damages or losses arising from any use of this document or its contents.

This material is intended for the personal use of the intended recipient(s) only and may not be disseminated or reproduced without the express written permission of Practical Investment Consulting. The information contained in this email message is being transmitted to and is intended for the use of only the individual(s) to whom it is addressed. If the reader of this message is not the intended recipient, you are hereby advised that any dissemination, distribution or copying of this message is strictly prohibited. If you have received this message in error, please immediately delete.