Investors fear share buybacks are propping up an otherwise anemic market and that a slowdown in the current buyback boom could cause the markets to crash. But is that fear well-founded?

The Breadth of the Buyback Boom.

Share buybacks hit a post-financial crisis high in 2015. Apple led all companies, spending a whopping $30.22 billion on buybacks in 2015 to mask slowing earnings, but it was not the only company repurchasing shares to boost per-share earnings: 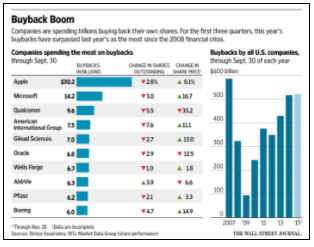 Companies can use their cash to enhance shareholder value in four ways: repurchasing shares; paying shareholder dividends; investing in the company’s future, by engaging in research and development or making capital expenditures; or merging with or acquiring other companies. In this article, we focus on the stock buybacks and share our views on the probable impact of buybacks on the market.

Buybacks are common among US companies.

Stock buybacks are not a novel tool. The vast majority of US companies have repurchased their own shares (see graph for details). Stock buybacks are more popular in US than in Europe for a number of reasons, including:

So contrary to those who might suggest that “this time it’s different,” it’s not unusual to see share buybacks or corporations account for high percentage ownership of the stock market in the US. 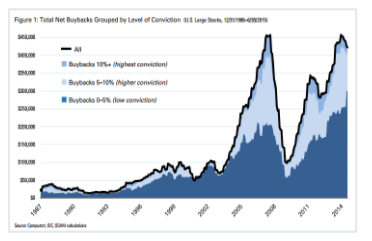 O’Shaughnessy challenges the assumption that all buybacks are a waste of shareholder capital − money that could have been paid to shareholders as dividends or invested in future growth is instead used to prop up share prices and boost per-share earnings. OSAM’s research found that the minority of companies that engaged in high conviction buybacks actually created value for investors by carefully buying back their stock when prices were low and by delivering significantly better, more consistent performance going forward:

OSAM’s research suggests that not all buybacks are bad for investors. Moreover, careful analysis of the companies issuing buybacks can signal a potential opportunity for investors. The managers we recommend generally focus on these high conviction companies in their composite strategies.

Recent updates from JP Morgan Asset Management show that while share buybacks and dividends per share are high, companies have been reinvesting as well:

These high capital expenditures demonstrate that companies are enhancing shareholder value in multiple ways – by increasing dividend yields, reinvesting in the company, engaging in mergers and acquisitions and stock buybacks – not just propping up prices by repurchasing shares.

Many low conviction companies that are issuing debt to buy back shares, a practice which could cause trouble should interest rates rise. Investors are concerned that stock prices of these companies could fall as a result of high debt levels. This concern is lessened by the fact that corporate coffers continue to be at high levels. In May 2016, Bloomberg reported that

While debt levels might be elevated in this low rate environment, the high cash levels provide comfort that the companies have a sufficient cushion to repay debt, fuel growth or weather unexpected crises.

O’Shaughnessy also ran some data to look at the change in the debt level of companies in the last 12 months (through March 31, 2016). Their analysis showed that companies which had a high shareholder yield (total of dividend and share buyback yield) had only 5.09% growth in debt to equity. Companies which had less than 5% shareholder yield had a 15.55% increase in debt to equity levels. This data suggests that selective analysis is required when looking at share buybacks as not all companies with high share buybacks have high debt levels.

The tax structure also affects share buybacks. An increase in the US federal tax rates on investment gains and income has lowered the popularity of dividend payouts and not surprisingly, increased the popularity of share buybacks within the US. While we are certainly not tax experts, generally speaking, dividends are taxed as ordinary income; they do not enjoy the lower capital gains rates wealthy investors desire. (In the interest of full disclosure, some qualified dividends may be taxed at long term capital gain rates, too.) When companies declare dividends, investors have to pay the tax in the year received, regardless of the current rates or the investor’s specific circumstances.

Buybacks give the investors the flexibility of choosing the timing of their share sale and the respective tax consequence.

Share buybacks are not always done for the sole purpose of propping up share prices or earning management incentives. Share buyback programs can also be used for other, investor-friendly purposes: to show the board of director’s confidence in the company; to send a signal to the market that the company’s stock is undervalued; to reflect the lack of other viable investment opportunities for the company; or to enhance shareholder value in a tax efficient way. That being said, stock buybacks motivated by management’s own interests or used as a short-term tactic can be detrimental to shareholders and can easily backfire. Share buybacks can increase company value in the eyes of the market and its shareholders when done to return capital to shareholders and they can destroy company value when done with high debt levels to increase short-term price. As is often the case in investing, share buybacks defy simple categorization. Careful analysis of share buybacks is critical in examining the decision to invest in the company.

The information provided herein is for general educational and entertainment purposes only, and should not be considered an individualized recommendation or personalized investment or financial advice; nor should the information provided herein be considered legal, tax, accounting, counseling or therapeutic advice of any kind. Any examples or characters mentioned herein are hypothetical in nature, purely fictitious, and do not reflect any actual persons living or dead. Practical Investment Consulting makes no representations, whether express or implied, as to any expected outcome based on any of the information presented herein. Users assume all responsibilities or the use of these materials, including the responsibility of protecting the privacy of their responses. Practical Investment Consulting does not accept any liability whatsoever for any direct, indirect or consequential damages or losses arising from any use of this document or its contents.

This material is intended for the personal use of the intended recipient(s) only and may not be disseminated or reproduced without the express written permission of Practical Investment Consulting.