The ABC’s of Trade War

HomeResearch The ABC’s of Trade War 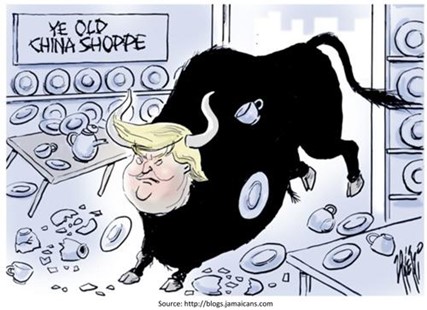 “Donald Trump’s trade war is an international tragedy. But it could have a happy ending if it eventually reminds us of the risks that free trade imposes on people, and if we improve our insurance mechanisms to help them.”- Robert Shiller of Project Syndicate.

Market analysts have been pontificating for weeks about the glaring headwinds from a brewing global trade war. Considering the tariff-related threats flying around, here are some facts to put global trade and tariffs in perspective:

While all the noise and increased focus on trade war can be quite unsettling, the numbers enacted so far are quite small. The complicated nature of global supply chains can make this positive picture hazy as trade measures could have a substantial effect on the supply chains.

The extent of war with China?

The U.S. has announced tariffs on $250 billion of Chinese imports so far this year—and threatened tariffs on an additional $300 billion of imports. The process of applying these tariffs—25% on $50B and 10% on $200B—will take time. Source: CNBC.

As the US looks to level the global trading field, we are already seeing retaliation from EU, Canada, China and other nations. China might be considerably more vulnerable than the US as their highly leveraged economy might be impacted more if the velocity of trade with the U.S. slows. The growth impact woul 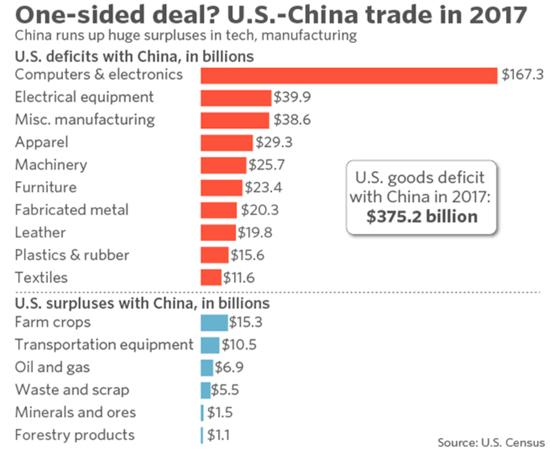 d be more severe for China than the U.S, as the $450bn of Chinese imports which could potentially be taxed account for 3.2% of China’s GDP. On the other hand, the U.S. exported approximately $130bn of goods to China last year, which is about 1% of U.S. GDP. Source: JP Morgan, Market Insights

The other big elephant in the room is combating the improper use of U.S intellectual property and forced technology transfers that have not been resolved. An amicable pact between the 2 countries that can balance the US trade deficit with China over time and progress on lower and fewer tariffs by both sides can benefit both countries. Neither side must blink first. Investors hope that both can come to amenable terms that benefit them respectively. The final decision on the $200 billion of newly-assigned import taxes will be some time after August 30, allowing for six weeks to negotiate, and the stock market seems to have accounted for this.

Is war a loss for all?

Larry Fink, head of Blackrock said in a conference call, “strong earnings and US economic growth, unfortunately, are being offset by heightened uncertainty due to rising protectionism and potential barriers to the open markets and free trade.” Source: cnn.com.

U.S. inflation could increase if the cost is passed on to consumers. While we are not yet at a point where direct comparisons to Smoot-Hawley can be drawn, engaging in a full-on trade war could lead the global economy on an unpleasant journey over the coming years.

Here are some quotes from companies, which give a sense of the impact of tariffs on companies and economies. The impact may be counterproductive for some companies. For example, General Motors said they could be forced to cut U.S. jobs if tariffs are applied to imported vehicles and auto parts, a different goal than President Trump’s goal of protecting American jobs. Procter & Gamble: Cites ‘meaningful’ impact of tariffs on a handful of products in Canada, which accounts for 3% of global sales. Brown-Forman: Raised Jack Daniel’s prices in light of EU tariffs. In the Materials sector, there might be some positive news: Ryerson: Metal processor’s sales guidance exceeds estimates in part because of higher anticipated demand from inventory dislocations tied to tariffs. Source: Bloomberg.

JPMorgan’s chart looks at the distribution of tariffs across sectors and across production lines. T 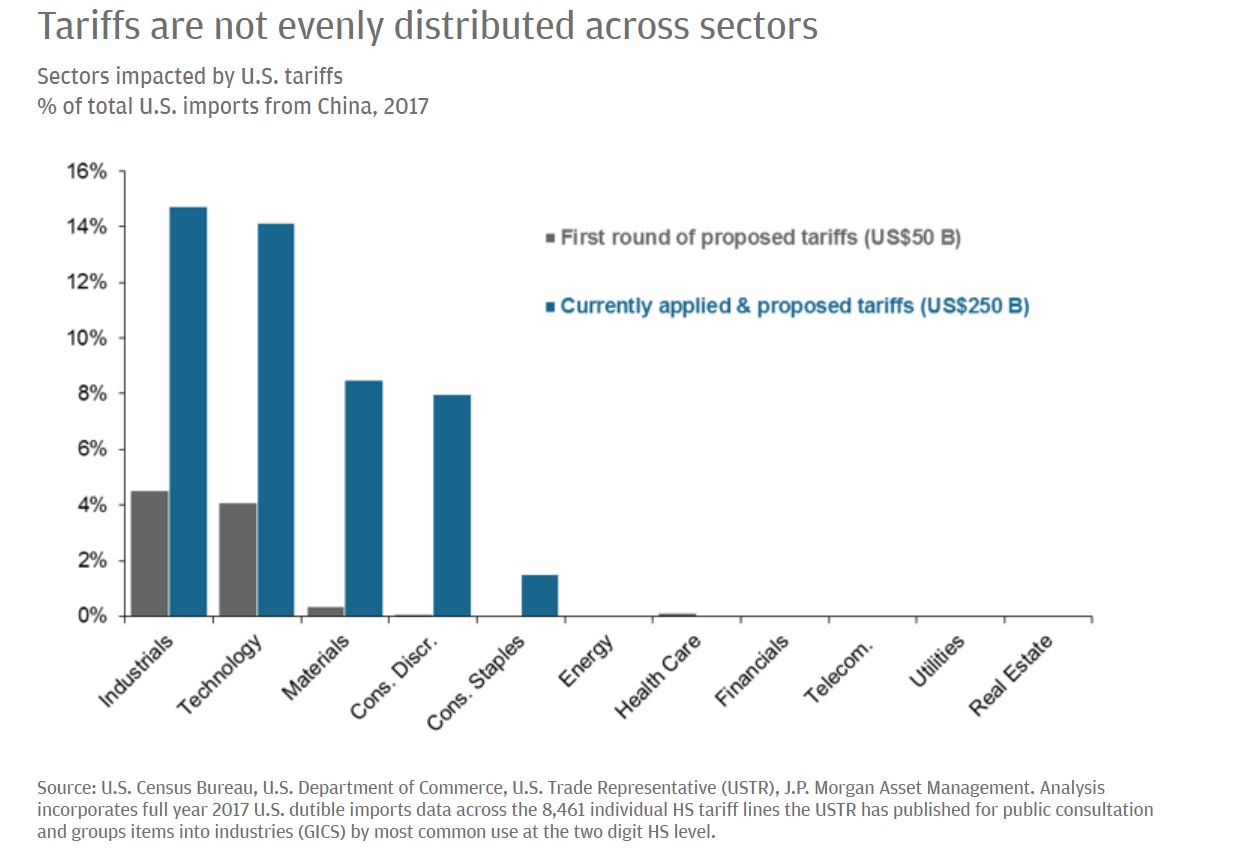 he uneven distribution will have highly differentiated effects on US companies based in their sectors.

The US economy is far less dependent upon trade than most of the trading partners however that level of protection might not extend to US equities. According to Ned Davis Research, about 50% of S&P 500 profits come from overseas and these profits will be threatened in any trade war scenario. In my opinion, a trade war most likely will be avoided, however, a rethink of the current trade dynamic with countries, especially China is warranted. Robert Shiller’s post in Project Syndicate discussed that while Trump’s trade war is an international tragedy, it could have a happy ending if it helps the world improve insurance mechanism against the risks of free trade.

The US markets have held well so far, compared to China’s market meltdown, European markets are in the red for most of the year along with the Asian and Latin American Markets.

While trade tensions remain a downside risk to growth and source of volatility for capital markets, it might be too early to make trade picks based on fears of a trade war. Small cap stocks have already had a great run in 2018 benefitting from greater earnings impact from tax cuts—and lower exposure to trade-driven revenues than their large-cap counterparts, lending Small Caps to outperform. International equities continue to be under pressure from risks of a trade war.

A trade war might be a low probability; however, we must acknowledge that unpredictable policy announcements could rattle the market, cause short-term market gyrations and keep global equities under pressure. The perception of trade war is a bigger worry as it could deflate animal spirits of businesses and impact global growth as a second derivative. Be cautious, not terrified. Keep your eyes and ears open to facts, not headline news. Be diversified and be long term!